The Fortune and Macdonald Blocks

In 1869, the Hudson's Bay Company surrendered all but 450 acres of Rupert's Land to the Dominion of Canada. The land that remained was laid out as a town they called "Selkirk" in 1872 and the first lots began to be auctioned off later that same year. It was through this auctioning off that Molyneux St. John purchased lots 19 and 20 for $1325 and $1750 respectively. With this purchase came the HBC's condition that a structure with a minimum $2000 value be built within 18 months of the sale.


This condition was not met with either of the two properties, with both sitting undeveloped for a decade. A large number of lots in the area stayed vacant or had insubstantial frame buildings constructed due to the main business district remaining north of Portage Avenue - for many, Graham Avenue seemed too far away. However, the arrival of Winnipeg's building boom in 1880-1884 put pressure on the properties that had not yet been developed.


It was during this time that ex-alderman Mark Fortune acquired Lot 20 and hired local architects Mancel Willmot and George W. Stewart to design him an office building. It was built in 1882 by contractors Grant and Gelley for a cost of $35,000. The result was a three storey brick building 50 feet by 70 feet in size.


Fortune then rapidly sold his building in the fall of 1882 to Alexander Macdonald. Macdonald built a matching addition to the south on Lot 19 for $16,000. The architects of the 50 by 70 foot extension are unknown, although they are suspected to be the same as the original building due to the fact that they match one another almost perfectly.


Much like the Winnipeg Hotel, both buildings were constructed in a form of the High Victorian Italianate Style, designed to draw attention from passersby. It was a style common to domestic and commercial buildings at the time and is visible in the highly decorated exterior - segmental arch windows on the top floors, an elaborate cornice used to make the buildings appear taller, and Romanesque, round-topped windows.


Fortune kept his headquarters for real estate in one of the upstairs offices of the Fortune Block, while the ground floor was split into two stores: Curran's City Tea Store and a dressmaker. The store to the south was taken over by Holman Bros Butchers and Meat Market in 1885, who remained there until 1904 when they moved to their own newly-constructed building on St. Mary's Avenue.

The store to the north had a number of different tenants, including the Dodd Shoe Company after it was uprooted by the construction of the Dominion Bank at Main Street and McDermot Avenue in 1898.


The Deaf and Dumb School, predecessor of the Manitoba School for the Deaf, was established in an office in the Fortune Block in 1888, where they remained for six months before space was found for them in the Education Building at the northwest corner of Kennedy Street and Broadway.

Meanwhile, Macdonald had established a wholesale grocery business in his half, which eventually grew into merchandising giant Macdonald's Consolidated. As the company expanded, he gradually took over the upper storey offices as well. A stone and brick warehouse was soon built at 193 Fort Street for the company in 1895, with another following in 1901 at 116-118 Market Street, in what had previously been an older residential neighbourhood. The company moved into the new warehouse and was eventually absorbed by Safeway Stores Ltd., predecessor of Canada Safeway.


After the move, the Macdonald block was purchased by local hotelier Sam Spence, who began the conversion of the building into a hotel in 1903. Architect H.S. Griffiths and contractor S.B. Ritchie completed the job, with a total renovation cost of $3500.

The new hotel opened as the Commercial, and was so popular that Spence leased a portion of the Fortune Block as a staff residence and possible an annex for guests. The Commercial Hotel lasted until 1984, when the main floor of the building became a private club.


After 1910, there was a large number and variety of tenants in both the upper and ground floors of the Fortune Block. Mark Fortune and his son chose this time to enjoy a trip at sea on board the luxurious new Titanic; they did not survive the sinking of the ship in April of 1912. In the 1920s, there was a lunch bar in the northern store, which continued in one form or another until the premises were taken over by National Auto Supply in the 1950s.

Both buildings had lost their wrought-iron cresting by the 1920s, followed by the removal of the cornice on the Fortune Block in the 1950s. It was replaced by a brick parapet and around the same time, a small one storey addition was added to house the upholstery business of the owner of both the Fortune Block and National Auto Supply. 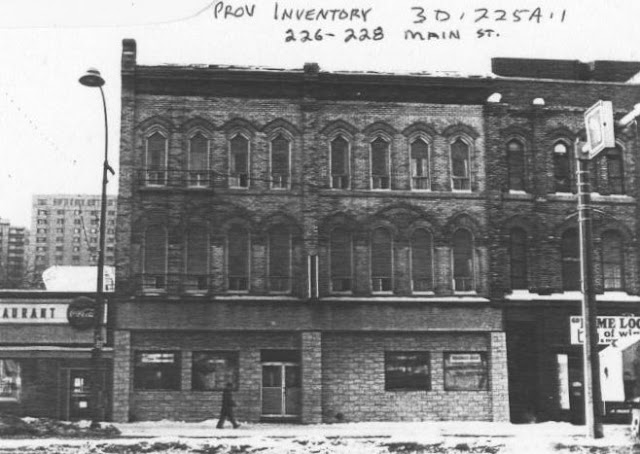 Eventually repairs to the Fortune Block's upper level suites became too costly and these floor were closed at the ground entrance. Only the main floor is now occupied, in part by the Times Change(d) High and Lonesome Club, which has been there since approximately 1987, according to the Winnipeg Free Press.

Renovations to the Macdonald Block have removed the then-outdated windows and the decorative multi-coloured brickwork was covered in white paint. Other buildings of the same era include the Drake Hotel (Benson Block), the Bawlf Block, and the Harris Block. The building boom of 1880-1884 produced numerous prominent brick structures, the bulk of which were constructed north of Portage Avenue and Main Street and have unfortunately been lost to newer buildings or redevelopment into parking lots. 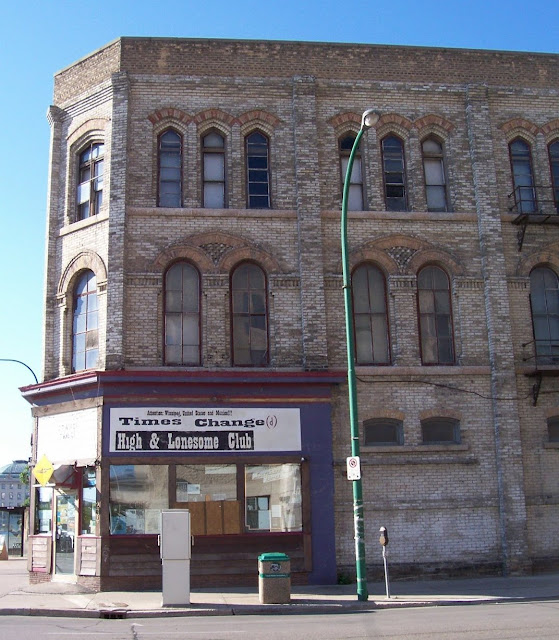 Other buildings designed by architects Willmot and Stewart included the Richardson Block, the Stobert Block, the Carruthers Block, the Winnipeg General Hospital, and the Mark Fortune Residence on Broadway, all of which have since been demolished.

Learn the fate of the Fortune and Mcdonald Blocks:

Culture Not Condos: The Fortune and Macdonald Blocks

Written by by Laura McKay, on behalf of Heritage Winnipeg.