A Winnipeg Landmark: The Bank of Montreal

December 10, 2015
Located on the southeast corner of Portage Avenue and Main Street, the Bank of Montreal has become an integral part of this iconic intersection. Designed by America's leading neoclassicists McKim, Mead, & White, with assistance from Winnipeg architect J.N. Semmens, the building cost $1,295,000 to construct in 1910. For more information about the history of Canada's windiest corner, visit our earlier post here.

The first Bank of Montreal branch opened in Winnipeg in 1877, housed in rented premises at Broadway and Main Street. The location would later change as corporate directors decided a space in the main business district would better attract new clients.


The arrival of the Canadian Pacific Railway brought with it the land boom of 1881. Just in time to take advantage of the influx of newcomers, the bank opened a new brick building at the southern end of Bankers' Row, near the south-west corner of Main Street and Portage Avenue. By 1906 this building was still considered to be a handsome structure, with a banking hall to attract customers with a "mahogany beam-panelled ceiling, central light dome, and pure fluted Ionic pillars of mahogany" ("Banks Noted for Integrity and Conservatism", Telegram, Sept.18, 1906).


However, the bank would have to build bigger and better if it was to compete with the majesty of Bankers' Row. In 1909, the current site was purchased. The Manitoba Free Press predicted the new bank would be "one of the most imposing buildings in Canada" as well as bearing "a striking resemblance to the Royal Exchange of London, England" ("Magnificent Building for the Bank of Montreal", Manitoba Free Press, July 2, 1909.). 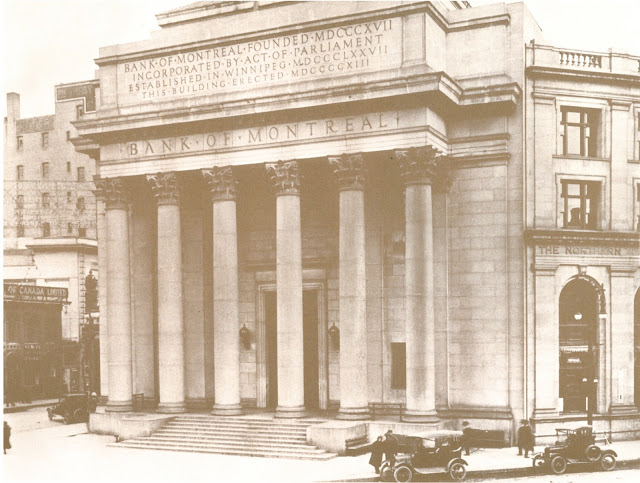 When the building was completed and the bank opened in 1913, the media's enthusiasm had already ensured its success. Designed to resemble a Roman temple, the estimated cost of construction was $1,295,000. Each of the six Corinthian columns that dominated the entrance were nearly five feet in diameter and weigh twelve tons, rising 50 feet above street level.


The vestibule was finished in Botticino marble imported from Italy and the 59 foot ceiling was finished in gold leaf. A horseshoe-shaped marble counter extended the length of the room, with a savings bank adjacent to the main stairwell to segregate personal account holders from corporate. Bronze grills enclosed tellers and a mezzanine floor encircled the main banking hall on all four sides. A board room and the western director's office provided a magnificent view of Portage Avenue and Main Street from above. 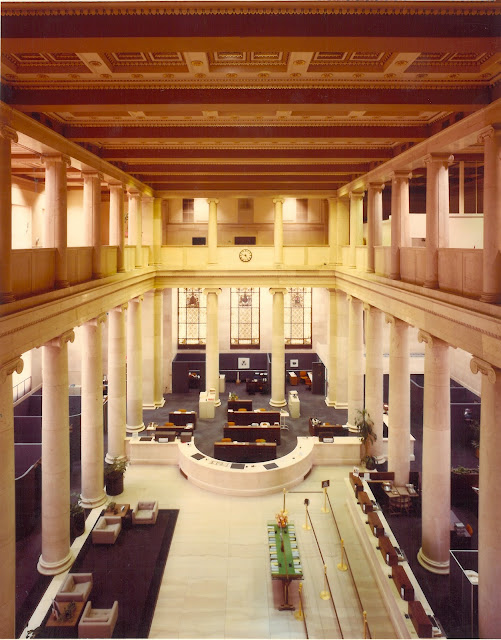 The new structure at Portage Avenue and Main Street epitomized early 20th century Bank of Montreal architecture. Starkly conservative, but neoclassical in their unadorned stone or brickwork, the facades of branches across the country bear a striking resemblance to one another, particularly in the larger cities. The common style consists of massive columns crowned by substantial entablatures and pediments. Decoration is avoided, with the exception of the inscribed name of the institution and perhaps a coat-of-arms.


The bank also possessed all of the accepted elitist characteristics of monumental Canadian banks, which differed greatly from the American banks designed by the same architects. Canadian banks were characterized by a manager's office to the left of the vestibule, segregated savings and corporate facilities, and a large open-area banking hall; these features can also be seen in the Bank of Commerce at 389 Main Street.


A Bank of Montreal subsidiary, the Royal Trust Company occupied the north side of the new structure until 1919, when they relocated to 436 Main Street. The building at 436 Main Street is now a municipally designated heritage building and has been as a night club venue.

The top two stories were reserved for officer living quarters. The third floor had a dining room and lounge facilities including food storage and kitchen space for hired help to cater to management needs. Bank officials slept on the fourth floor in a long row of bedrooms. Each bedroom boasted a sitting room and clothes closet, with bathrooms dispersed at intervals throughout the floor. An attic above the fourth floor provided extensive storage space, all to ensure bank officials new to Winnipeg would suffer no inconveniences.


The bank's vaults were in the basement, weighing a total of 450 tons. The massive vaults were designed by Frederick St. Holmes of New York and built by J & J Taylor Ltd. along with Toronto Safeworks. Each set of vault doors weighed 50 tons and were lined with four inch thick solid steel plate. The building had steam heat and electric lighting so the boilers, fitters, blowers, and pumps occupied their own basement rooms. Basement lockers and lavatories served the bank's clerks and transformers and coal bunkers filled the sub-basement.


After WWI, the Bank of Montreal wished to create a memorial to the 230 members of their staff who have fallen in the Great War. To find the best design possible, they held an international competition, which was won by American sculptor James Earle Fraser. Fraser had submitted two designs: an allegorical figure of Victory in marble, which sits in the Montreal Main Branch; and the bronze sculpture that sits in front of the 335 Main Street branch.


Erected on December 5th, 1923, the 9-foot bronze statue depicts a Canadian soldier in WWI battle gear grimly staring off into the distance. The sculpture was modeled after Winnipeg Branch staff member, Captain Wynn Bagnall, who had served through the war and had been awarded the Military Cross. Fraser would later receive a gold medal of honour at the New York Exhibition of Architecture and Allied Arts for the Winnipeg sculpture.


Built with structural integrity and longevity in mind, the building at 335 Main Street required few upgrades until the late 1940s, when a new lighting system was installed. The early 1950s brought more changes, with the fourth floor living quarters replaced by general offices and new glass screens to replace the bronze tellers' cages. Larger front windows were installed, followed by air conditioning and mezzanine renovations.


In November of 1976, the Bank of Montreal marked the institution's 100th anniversary in Winnipeg by refurbishing this historic branch. At the forefront of restoration architecture in Winnipeg, the Bank of Montreal spent $2.4 million to restore the building to its 1913 form. The renovations began in 1975 and included the cleaning of the exterior walls, the installation of a new copper roof, and the refurbishing of all marble surfaces.


Artificial back-lighting was placed behind the stained glass symbols of the Bank of Montreal, Manitoba, and Canada. Modern heating and electrical systems followed shortly after. As a result of both the renovations and the move to preserve Winnipeg's heritage in the late 1970s, the building was added to Winnipeg's list of designated heritage buildings in 1980.


Following construction a new, 317-foot 25-storey office tower was opened beside the building in 1984 to serve as the management centre for the Bank of Montreal's operations in Manitoba and west of Thunder Bay. Designed by Winnipeg's Smith Carter Partners, the new tower was officially opened on May 24, 2984.


Meticulously maintained, the building at 335 Main Street has earned three awards from Heritage Winnipeg for Architectural Conservation - first in 1982, and then again in 1993 and 1995. The bank has also been a longstanding participant of Doors Open Winnipeg, welcoming the public to visit and learn about the bank's rich history.