The Streetcar and the Strike: A Reflection on the 100th Anniversary

September 19, 2018
The Winnipeg General Strike of 1919 has been forever immortalized by L.B. Foote's photo of strikers tipping a streetcar in front of City Hall. As a result, the streetcar has become a symbol of the strike itself, workers uniting to fight for a better life. Streetcars have a history of being involved in labour reform, and were both operated by and used by the many of the people who went on strike in 1919. The streetcar would even became the center of a violent conflict between strikers and officials in 1919 that ultimately brought the Strike to an end.


The first electric streetcar took to the tracks of the Park Line in Winnipeg on January 27, 1891, with free rides for all on opening day. Owned by the Winnipeg Street Railway, the introduction of the electric streetcar in Winnipeg was result of young Albert W. Austin's dogged efforts. Winnipeg became the fifth city in Canada with electric streetcars, ahead of Ottawa, Montreal, Toronto and even New York. Doubtful city councillors had relegated the new electric streetcars to the "bush", a sparsely populated area by Osborne Street and Jubilee Avenue, where the dangerous overhead wires could not harm anyone. Banned from operating on the main streets of the city, the ever enterprising Austin eventually built River Park, an amusement park (on the north shore of the Red River around Osborne Street), that became a desirable destination that his streetcar could conveniently take you to. 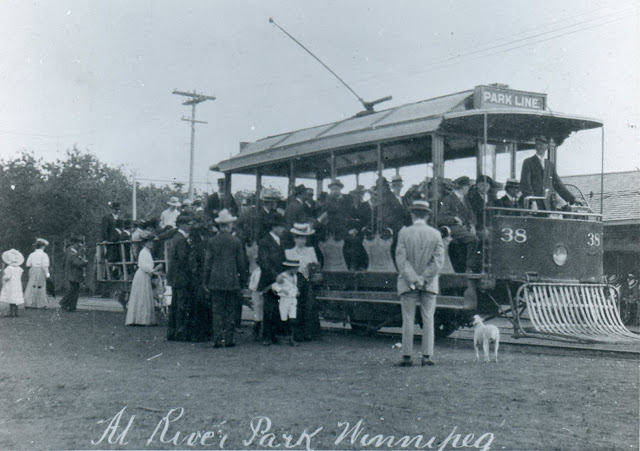 Despite its success, the Winnipeg Street Railway never ran electric streetcars in Winnipeg as city councillors were not a fan of Austin. Councillors did though, recognize the potential and need for this new form of public transit in the city and instead granted James Ross and William McKenzie the sole rights for electric streetcar operation in Winnipeg. Ross and McKenzie wasted no time - the new Winnipeg Electric Street Railway ran its first car down Main Street on July 26, 1892. This ushered in an era of expansion and competition - as horsecar still serviced the streets of Winnipeg and electric streetcar technology had some glitches. Trolley poles were endlessly disconnecting from the overhead wires, the poles themselves had a tendency to break, fare punches were often out of commission and harsh winters were an endless calamity that gave the old horsecars a real boost. With tickets for either company costing just $1.00 for 50 - two cents each, people were willing to put up with a few inconveniences.


By May 12, 1884, the two companies had merged into the Winnipeg Electric Street Railway. Austin had been bought out, the horsecars had gone out of service and fares went up to to $1.00 for only 25 tickets, a 50% increase. But the demand for streetcar service only continued to grow. Municipalities surrounding the city were incorporated into the streetcar system, which eventually reached all the way to Lake Winnipeg. Even the arrival of the first personal vehicle on June 14, 1901 did not stop the expansion of the streetcar. Everywhere the streetcar ran, development followed. It had become the driving factor in the expansion of Winnipeg, providing affordable and reliable transportation from the country to the core.


As 1906 dawned, all as not well with the streetcar. Employees were unhappy with many things including low pay, long hours, unsafe working conditions and lack of recognized unionization - and they had the public on their side. In the early morning hours of March 29 negotiations between the Winnipeg Electric Street Railway and their employees broke down, resulting in all 237 employees unanimously voting:

Unsurprised by the result, the company had 200 replacement workers ready to run the streetcars when the sun came up. Employees that had stayed up all night for the strike vote formed a peaceful picket line as the streetcars started their run. Before noon the tired employees went home to bed, replaced by an gathering, angry crowd.


What started out as the public wearing badges proclaiming "We Walk" and protesting the use of the streetcar in solidarity, ended in violence. Replacement workers were ridiculed, streetcar windows were broken by a barrage of stones, trolley poles were pulled off the wires and two streetcars were set on fire. Streetcar service was at a complete standstill by one o'clock in the afternoon.


March 30th started out much like the day before with crowds gathers ready to stand up for the employees rights. But the streetcar company brought in security personal from the United States and the riot act was read, heralding the arrival of troops from the Osborne Barracks. The violence subsided, but not with out the mayor, Thomas Sharpe, first being clubbed by security personal. In the days to come, it was Reverend William Patrick and Reverend Joseph Sparling that were given credit for mediating the end of the strike, with some of the employees demands being met. Much to the relief of the public, tired of the inconvenience of walking, events being cancelled and businesses closing early, on April 7th, 1906, streetcar service resumed.

When 1918 arrived there was a fleet of 341 cars and Winnipeggers were confidently building homes and businesses well beyond the city's center, knowing that the streetcar would get them where ever they needed to go. But all was not well in the city. Veterans had returned from WWI only to find there were no jobs for them. Workers were unhappy with their conditions, wanting shorter hours and better pay. Seeking power in numbers, the beginning of 1919 sees efforts being made to unionize workers under the One Big Union. On May 1st, unionized workers from three main metal shops in Winnipeg went on strike, appealing to the larger Winnipeg Trades and Labour Council for help when their employers refuse to negotiate. A vote was taken and the results were clear:

The Winnipeg General Strike started on May 15th, 1919, at 11:00am. The city was paralyzed. Around 30,000 workers, men and women, put down their tools and walked off the job that day, with veterans joining their ranks. No facet of life was untouched by the strike. No mail or milk in the morning, no gas for the car, no shopping for essentials, no restaurants to eat at and no telephone to call for help (not that it mattered because the police and fire fighters had joined the strike too). Amidst the countless professions that answered the call to strike were the streetcar workers. Within an hour of the strike starting, all the streetcars in the city had been returned to their barns. Regular streetcar service would not resume until the end of the Strike.


Neither levels of government supported the Strike, banning together with wealthy members of the community to discredit the strike and its objectives. Their efforts failed as support of the Strike was spreading across the country, with smaller strikes starting up in around 20 other communities. Deportation was threatened, the entire Winnipeg Police Force was fired, arrests were made and the military was brought in. Despite the strong pushback from both the municipal and federal government, the strike held fast until the fateful day of Saturday, June 21st.

Pro-strike veterans planed to march after a failed meeting with the Mayor. The Mayor threatened to use force to break up the march, but the veterans would only back down if the strike was ended and no streetcars ran that day. But there was no resolution and around 2:30pm the crowds started to gather at Main Street and William Avenue. A streetcar rumbled down the track from the north, driven by a strikebreaker. The angry crowd let it through. A second streetcar, 596, approach the crowd, this time from the south. Running the streetcar was a personal affront to the strikers, and seeing it pass a second time was too much. The strikers swarmed around the streetcar, knocked the trolley pole off the wire, smashed the windows and rocked back and forth in effort to tip it on its side. Only able to knock Streetcar 596 from its rails, it was instead set on fire by a female striker.


Fearful that the strikers were going to over through the government, the Mayor read the riot act and called in the RCMP and military to disperse the crowds. A firetruck operated by strikebreakers made it through the crowd to put out the streetcar fire. Violence filled the streets as insults and objects are hurled at the government forces while baseball bats and firearms were used against the crowds. By the time the dust settled, two men were dead, countless injured and many arrested. The day was henceforth dubbed "Bloody Saturday".

Streetcar 596 was towed back to the garage, patched up and put back into operation. The strike leaders feared that more violence would ensue if the strike were to continue, and so the 1919 Winnipeg General Strike came to a close on Thursday, June 26th at 11:00am. Streetcar resumed their regular schedule in a city where little had changed - employers made few concessions and many lost their jobs for good. Yet attitudes had changed, both in Winnipeg and throughout Canada. It was the birth of the modern labour movement, and the beginning of the betterment of the quality of life for all workers, with the streetcar there to bear witness to it all!

One of the streetcars that was riding the rails during the 1919 strike was Streetcar 356, built in 1909 in Winnipeg and in service for 46 years. It is one of the last remaining original wooden streetcars from Winnipeg's golden era of public transportation, sadly left to decay in the elements after the streetcar service ended in 1955. In 1980, Heritage Winnipeg took over responsibility for Streetcar 356, with a goal of conserving this tangible connection to our history. Now housed on track 2 at the Via Rail Station in the Winnipeg Railway Museum, it is on display during Doors Open Winnipeg. As the streetcar played a fundamental role in Winnipeg's development and social activism, Heritage Winnipeg believes restoring Streetcar 356 is truly a worthwhile and honourable endeavour, conserving our history for generations to come.


Learn more about the restoration of Streetcar 356


Written by Cheryl Mann on behalf of Heritage Winnipeg.

The Life and Death of the Elms

The Promise of Our Lady of the Good Heart

The Ringleaders of 121 Euclid Avenue