A Renaissance on Main Street: The Woodbine Hotel

June 05, 2019
The Woodbine Hotel is an enduring icon of the Main Street landscape, continually reinventing itself for over 140 years. The tradition continues to this day, as the Woodbine is being transformed once again, all while still retaining its historic charm and welcoming atmosphere. The owners, Sam and Nigel, along with the manager Alexis have spent the past year updating the hotel and bar, bringing it up to date with its hip neighbors on this vibrant part of Main Street.

The Woodbine at 466 Main Street was built in 1878, originally a two storey wood framed building named Dufferin Hall. At that time, it functioned exclusively as a bar and the building did not extend to Albert Street as it does today. Over the years various owners have made changes and additions to create the current building. Always reinventing itself to keep up with the trends, the heart of the building has remained the same while the exterior kept pace with a thriving young city in the early 20th century.


In its first decade of operation, the Woodbine experienced unstable management, passing from owner to owner. Despite this, the hotel was able to grow with the addition of a buff brick facade, rooms to the second floor and a fancy restaurant that served oysters (the mark of a classy restaurant at the time, just like today). Around 1889, Edward Hebb purchased the Woodbine, providing steady management for the next 30 years. The new owner replaced the facade, this time with dark bricks and limestone accents. Hebb also expanded the hotel in 1904 after a fire burned the roof of the building by hiring James Henry Cadham, the architect behind the Frost and Wood Warehouse, the Alloway Champion Building, as well as a many other buildings in the downtown. Cadham oversaw the expansion of the Woodbine to Albert Street and addition of the third storey. A second fire in 1923 forced Hebb to make further renovations, hiring E.W. Crayston to repair the damage and reimagine the facade.

In 1916, prohibition was enacted across the province, forcing the Woodbine to get creative in order to remain viable. From then until the end of prohibition in 1927, the Woodbine became a temperance bar serving temperance beer, coffee, and soft drinks. Bowling lanes were added to the main floor and basement, and a barber shop was even installed during this period, giving people a reason other than drinking to visit the establishment. With the end of prohibition, the Woodbine served alcohol again; however only male patrons were allowed into the bar due to post-prohibition laws. The Woodbine did not reopen its doors to female patrons until 1985.


Amid all these changes, Woodbine has always served as a bar, making it one of the oldest bars in Winnipeg that still serves its original function. The current owners intend to keep it that way, keeping the best elements of the historical building while making updates so it can be successful for many years to come.

Four years ago Sam and Nigel, the current owners of the hotel, were looking to get in the bar business while the previous owner of the Woodbine was looking to sell. Sam and Nigel bought the hotel, and soon its historic charm and community of patrons won them over. They became interested in restoring the building to its former prestige and began to embark on historically sensitive conservation projects. Their efforts were rewarded with a conservation award at Heritage Winnipeg's 2019 Annual Conservation Awards. With their newfound enthusiasm for heritage buildings, Sam and Nigel have also bought the Vendome Hotel, which they also plan to renovate.


None of these changes mean that anyone wants to replace the hotel’s current clients. The owners want to maintain the sense of community that their customers feel in the bar while attracting new clientele. Every year around Christmas, the Woodbine holds a customer appreciation night with food and prizes. Tenants of the hotel are also invited to a holiday meal courtesy of the hotel. And on New Year’s Eve there is yet another party, with food and live music all night. 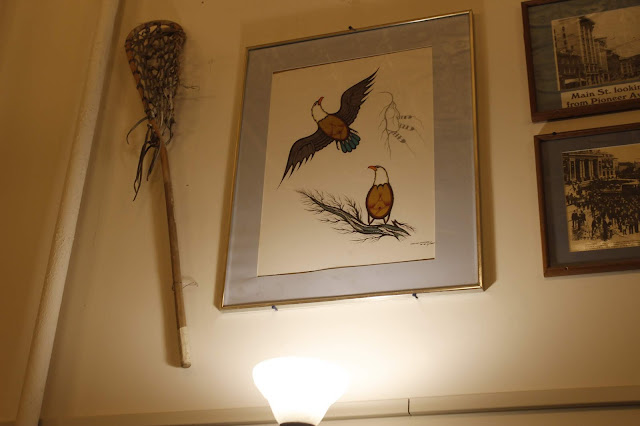 The recent positive changes at the Woodbine have not gone unnoticed. The hotel even caught the eye of actor Sean Penn, who visited the bar earlier this year while looking for a film set to shoot on this summer. Although he chose a different location in the Exchange District, he was very impressed with the Woodbine, making a point of telling Alexis how great the bar looked and taking pictures of the interior and exterior.

Other visitors to the hotel include those of the spiritual kind. It only takes one trip down to the long, dark creepy basement to convince people the building is haunted. Staff have commented on how they feel like they are being watched when they gather enough courage to venture down the stairs. Flickering lights in the building have been attributed to patrons that have passed away and come back to visit their favourite haunt while orbs of light are regularly seen on the security cameras. Although the basement may be unwelcoming, the rest of the hotel seems to be so well loved by its patrons that no one ever wants to leave! 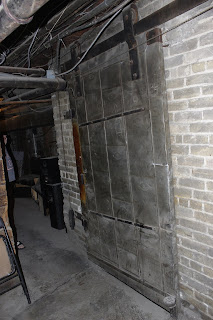 Behind this door is the original boiler. According to Alexis, the sliding door was put in place to “minimize” the damage of an explosion if the boiler exploded. Doubtless the sliding door would have been very helpful in such an event. Source: Heritage Winnipeg. 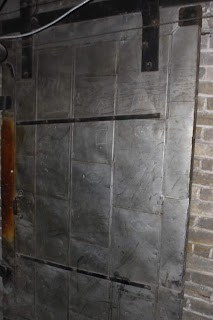 The current renaissance at the Woodbine Hotel is not yet complete. The next conservation project will address the front facade, including removing the glass block windows behind the Woodbine sign and replacing them with windows that do greater justice to the building’s heritage. Heritage Winnipeg is thrilled with the work that has been done so far on the building and is looking forward to assisting the owners and staff with future conservation efforts. Sam, Nigel and Alexis are an outstanding example of the passionate and committed individuals who are involved with built heritage for all the right reasons. With them at the helm and the protection of a municipal designation, the Woodbine Hotel will be welcoming patrons, new and old, for many years to come! 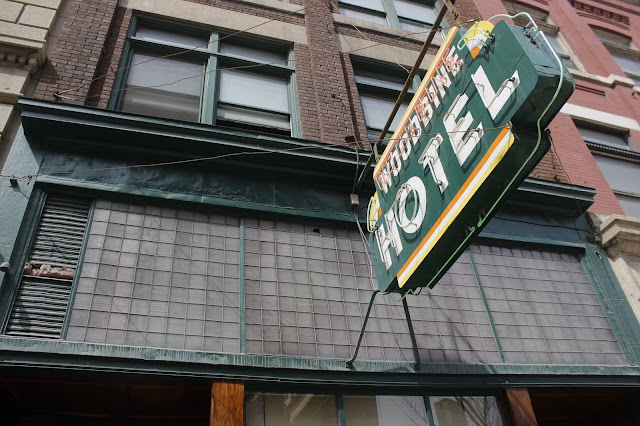 Thank you to the Woodbine Hotel's manager, Alexis for taking the time to share her insights on the hotel.