September 18, 2019
Winnipeg's streetcars have vanished - sold, scrapped, crushed, burned and buried - erased from history with only the fading memories of an aging generation to cling to. Once the height of modernity which made Winnipeg a desirable place to live and drove its development, today the streetcars have disappeared without a trace, without a single reminder of their invaluable contribution to the making of a prosperous young city. Why have they faded from our collective conscious when other cities capitalize on their rich history and endearing charm, drawing in locals and tourist alike? Of the 433 magnificent streetcars that once road the 120 miles of rail in Winnipeg, today only one remains, Streetcar 356. Reluctantly rescued, volunteers have steadily worked on restoring it to its former glory, determined to save this last precious remnant of Winnipeg's streetcar history before it is lost forever.


On a crisp October morning in 1882, Winnipegger's excitedly gathered on Main Street to see the latest in transportation technology, a must for progressive cosmopolitan cities, sputter to life. It was the dream of the ambitious young Albert W. Austin, who could have never foreseen the vast impact his company would have on the growth of Winnipeg. A horse stomped its feet impatiently, waiting for passengers to load. Once everyone was settled, with a simple flick of the wrist by driver James Wilson, Winnipeg's first streetcar took to the rails. It was the the start of a golden era for Winnipeg, with the streetcar serving as a symbol of progress and an influential force that shaped the evolution of the city for the next 73 years.


Austin, who hailed from a well-to-do business family in Toronto, was only 23 when he arrived in Winnipeg. Full of ambition and ideas on how to improve his new home, Austin created the Winnipeg Street Railway Company in 1881 and convinced a hesitant city council to let him take to the roads in 1882. With four cars and twenty horses in action, the Winnipeg Street Railway Company quickly became an efficient and reliable means of transportation that only cost ten cents to ride. Using the rails the streetcar provided an escape from Winnipeg's notoriously muddy streets, and come winter the streetcars were replaced with sleighs that made short work of the snowy weather. By 1883 the company was quickly expanding its routes and fleet, trying to keep up with the growing demand for service. Winnipeg's streetcars were a roaring success.


In 1891 Austin further modernized his company, bringing the first electric streetcar to Winnipeg. It was a sight to behold, a streetcar fully ablaze with five electric lights on a dark and cold January evening, while crowds of Winnipegger's waited patiently for a chance to ride it. Winnipeg was clearly on the rise, only the fifth city in Canada to operate electric streetcars, surprisingly ahead of larger cities such as Toronto and New York. Providing timely and reliable transportation in and out of the downtown, Winnipeg's growth would follow the routes of the streetcar. This is clearly seen in the development of Winnipeg's first suburb, the area now known as Osborne Village. Once both undeveloped and undesirable "bush" land, it was disconnected and far away from the downtown before Austin's Park Line made it easily accessible. People started building houses and businesses soon followed to serve the needs of the new residents, a pattern that was repeated many time over in the development of Winnipeg. Although Austin would sell his company only three years later due to competition and a terrible fire at his horse barn, he was a true pioneer of Winnipeg's streetcar industry whose relentless perseverance both modernized and shaped the city.


Over 60 years have passed since the last streetcar graced the streets of Winnipeg on September 19, 1955. Giving way to diesel buses at a time when fuel was cheap and flexibility was prioritized, little thought was given to the old streetcars' historical significance or environmental efficiency. After Winnipegger's bid farewell to the streetcars, they seem to have retreated into the memories of those who once road them without a physical trace left behind. But the streetcars never completely disappeared - their rails often lay just beneath the pavement of our modern streets, while the cars themselves were repurposed for all manner of functions, with pieces scattered far and wide. Some did meet their end, crush and recycled or burned for fuel. Out of sight and out of mind, Winnipeg's streetcars had simply disappeared until 1980, when the Old Market Square Association rescued a decaying streetcar from fading into obscurity on the north east edge of the city.

Beneath years of dirt and grime, the paint still proudly announced the streetcar's number to be 356, written in an elegant script that hankered back to a more affluent era. Clawed back from the edge of extinction, the problem of what to do with Streetcar 356 quickly arose. Years sitting out in the elements had not been kind to it, leaving it a bedraggled shell of its former self. What was needed was an indoor storage facility and people passionate about restoring Winnipeg's transportation history. Disappointingly, no one seemed willing to step up to the plate despite the talk of how wonderful the streetcar was. Although streetcars are outside the mandate of Heritage Winnipeg, which works to promote the conservation of Winnipeg's built heritage, Heritage Winnipeg recognized the important role the streetcar played in shaping the city and were unwilling to let it fall to the wayside. But Heritage Winnipeg was in its infancy, only formed two years prior, resources were extremely limited and the number of heritage buildings that needed attending to was overwhelming. None the less, Heritage Winnipeg took on the responsibility of Streetcar 356, moving it to the Winnipeg Transit Garage on Osborne Street where it could be safely stored until the time came that it could be lovingly brought back to life.

Streetcar 356 was a part of the 350 series, built in Winnipeg's Fort Rouge Shop in 1909. It was a wooden ten window car but with a narrow front vestibule reminiscent of the nine window car - likely because the millwork from a nine window car was reused in the new car. Streetcar 356 underwent several renovations during its years in service, in 1920 it was rebuilt to have a low floor, in 1926 it was changed to a one man / two man car, and finally in 1929 it was converted to a one man car. After becoming a one man car, Streetcar 356 was in continuous operation until 1955, when it was retired as Winnipeg's streetcar service was brought to a close. Retirement was not kind to Streetcar 356. Anything that could be salvaged was removed leaving the shell to be sold off for $100. Relegated to the fringes of the city, time and weather made quick work of the sad streetcar.


By the mid 1990s, Streetcar 356 could no longer stay at the Transit Garage. Heritage Winnipeg was still no in a position to give the car the attention it deserved and again no other interested parties could be found. So Streetcar 356 was relocated to the train shed in Union Station at 123 Main Street, still waiting patiently for a restoration. The, finally, things started looking up for the long suffering streetcar. 2005 marked the 50th anniversary of the last run of the streetcars in Winnipeg, reigniting the public's interest in restoring the streetcar. Ever passionate volunteer David McDonald headed up the Streetcar Committee, searching for funding, collecting parts and finding skilled volunteers to do the work.


Restoring Streetcar 356 has been a challenging task. It was in poor condition from years of neglect and the trucks, which is the assembly under a streetcar including the wheels and very costly to replace, were missing. Funding was hard to find and the train shed where Streetcar 356 is stored is unheated, making it too cold to work in during the winter. Tucked away in the furthest reaches of the Winnipeg Railway Museum, Streetcar 356 is hard to find even if you know where it is. But the volunteers have preserved, meeting weekly to slowly rebuild what over 60 years of neglect had destroyed. As of 2019, the group continues to work, with all the original members of the Streetcar Committee still dedicated to the task, and a group of about 25 additional volunteers that come out to help when they can. The project has brought people together and spanned generations, with grandfathers, sons and grandsons working side by side. With the passing of Committee Chair David McDowell in the summer of 2019, the group is now more determined than ever to see the project through. 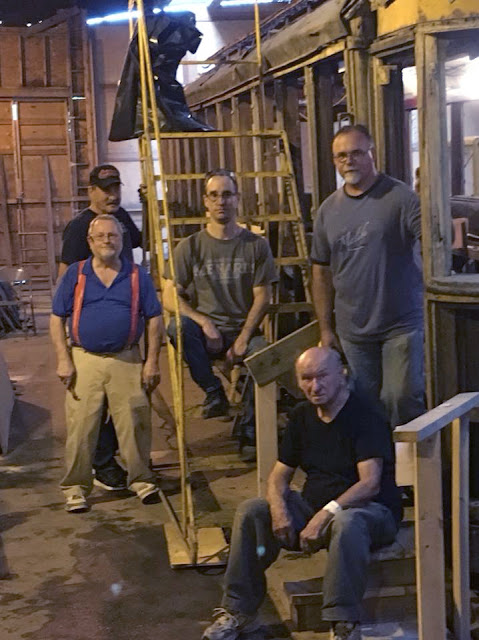 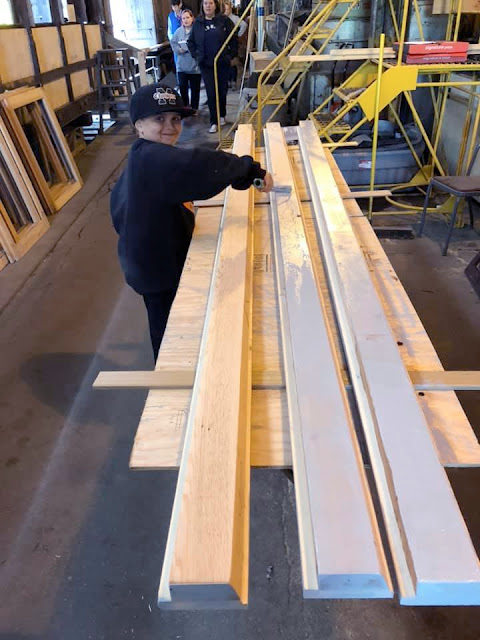 Winnipeg's streetcars were an outstanding example sustainability, transit orientated development and social equality. They made it possible for the city to growth and flourish before the advent of the personal vehicle and are a reminder of what is possible when innovation is allowed to prosper.
As the restoration of Streetcar 356 slowly nears the finish line, a new challenge is arising - where will the finished streetcar go so it can be enjoyed by the public? With no transit museum in the city, it is hard to find a location that is suitable. Heritage Winnipeg is determined to find it a good home, so this "grossly overlooked" part of Winnipeg's history will hide in the shadows no more. In the mean time, an original streetcar bell waits to be put back to use, ready to ring out loudly, announcing that Winnipeg's streetcars have been at long last been found!


Be sure to come visit Streetcar 356 during Railway Days!
a FREE event
September 22nd and 23rd, 2019
10am to 5pm
Track 2 at the Winnipeg Railway Museum
Via Rail Station at 123 Main Street
You can help make the restoration of Streetcar 356 possible by donating to our GoFundMe Campaign!
Want to learn more about the Streetcar 356 restoration project? Check out the website and Facebook group.
Interested in volunteering to help restore Streetcar 356? Email Heritage Winnipeg at info@heritagewinnipeg.com

THANK YOU TO THE SPONSOR OF THIS BLOG POST:

Written by Cheryl Mann on behalf of Heritage Winnipeg.