The Many Faces of the Ryan House: 5 East Gate

November 20, 2019
In a quiet neighbourhood tucked into a generous bend of the Assiniboine River sits a “suburban haven” known as Armstrong’s Point. Home to many of Winnipeg’s prominent citizens, the neighbourhood was developed between the 1880s and the early 1900s. Drawn to the relative seclusion and spacious lots, Winnipeg’s well-to-do built an eclectic array of homes, from well appointed family residences to sprawling mansions. Some of these grand estates, like the striking Ravenscourt Manor, have been lost, while many still remain, sheltering generations of Winnipegger’s beneath their elegant roofs.

Thomas Ryan and his family moved to Armstrong’s Point in 1906, taking up residence in a handsome new mansion designed by architect William Wallace Blair at 5 East Gate. Set on lots one and two, the Ryan House, by all accounts, was stunning. Two and a half stories of red brick and white trim set upon a stone foundation with an imposing two storey portico supported by four Doric columns, the Georgian Revival structure made a stately home. The interior, similarly ambitious, featured detailed quarter oak wood paneling, twelve foot oak pillars, hardwood floors, stained glass and fireplaces. The Ryan House was one of several homes Blair would create for Winnipeg’s elite. Mark Fortune’s house, William Whyte’s house and the Roslyn Court Apartments are some of Blair’s most famous designs.

Upon completion, the Ryan House cost $18,000 to build. This was no small expense at the time, but Ryan could certainly cover the costs. Ryan had come to Winnipeg in 1874, opening up a retail store selling boots and shoes. After partnering with his brothers, Michael, James, and George, in the 1880s the family store grew to become one of the largest businesses of its kind in Canada. Ryan then ventured out of retail in 1889 to focus exclusively on footwear manufacturing and wholesale and in the process earned himself the nickname “The Shoe King”.

On top of running a business, Ryan was politically active in Winnipeg early in his career. He was alderman (this position is now known as a councillor) from 1884 until 1889, at which point he served one term as mayor. A devout Methodist, Ryan pushed for business restrictions on Sundays and served as president for the local YMCA.

For many of his early years in Winnipeg, Ryan and his wife Annie Anderson, lived near Central Park in the downtown area. As the neighbourhood grew with new stores and apartment complexes, Ryan and his family sought out property in Armstrong’s Point to escape the hustle and bustle of urban life.


Their generous new home in Armstrong’s Point was built to accommodate Ryan, his wife Annie, and their nine children. The first of many parties would take place in the home in October of 1907, shortly after Ryan had spent an additional $2000 to add a stable to the grounds. Three years later, in 1910, Ryan purchased additional property to expand the grounds of the estate.

Unfortunately, the Ryan family’s prosperity was short lived. In 1916, the Ryan House was bought out by the Northern Improvement and Investment Company, who divided the property into two separate lots. The remaining portion of 5 East Gate where the house was located was then purchased by grain broker Robert M McClean in 1921, who owned it until it was seized by the City of Winnipeg seized for unpaid property taxes in 1935.

Sadly, the house remained vacant for the next three years. By this point, the Great Depression was in full swing and there were few who could afford to buy a luxury single-family home. To encourage the adaptive reuse of such large homes, and increase their affordability while creating more desperately needed economic housing options, governments financed home improvement schemes. The idea was for the money to be used to divide large single family homes into multiple affordable units. The City of Winnipeg provided tax exemptions for repairs on buildings up to $2000 and the Canadian government spent $50 million on similar programs, also with a cap of $2000. For some context, that would be somewhere around a $35,000 limit in 2019. Ultimately, twelve houses in Armstrong’s Point were converted into duplexes between 1943 and 1951, including the Ryan House.

The house’s next owner, Gerda Gertz, bought the house in 1964 and adapted into a nursing home, before selling it to Doris Muyzka in 1971 who continued to operate the nursing home. Muyzka remained in the house until 1982, at which point it was purchased by one of its most unusual owners – the Government of the Northwest Territories.

The Government of the Northwest Territories redeveloped 5 East Gate into the Ublivik Referral Center, a temporary residence for Inuit children seeking medical treatment in Winnipeg. After roughly a decade functioning as such, the Ryan House was purchased again and turned into an artists residence. The house’s present day owners acquired the Ryan House in 1997,  and it operates as a bed and breakfast known as The Columns.

If you are ever in search of ideas for how to adaptively reuse a single family home, the Ryan House provides some excellent examples. From a single family, to a duplex, to quadraplex, to nursing home to government housing, to single family, to a bed and breakfast, it has run the gamut of housing options. Yet even with the steady series of interior renovations, much of the home’s original charm remains. It is an outstanding example of the flexibility and durability of heritage buildings, steadfastly contributing their outstanding character to the streetscape, and strengthening the environmental sustainability of neighbourhoods.

Winnipeg has a truly remarkable stock of historic homes, with well over 1000 houses built before 1919, helping shape a distinct community with a deep sense of place. Armstrong’s Point’s residents have always been acutely aware of the many valuable contributions historic homes provide the city with, and have worked hard to ensure that their heritage homes will do so in perpetuity. As early as the 1950s, residents’ associations were fighting against structural changes to some of the houses (with mixed degrees of success, in the case of the Ryan House).

Perhaps it’s not surprising, then, that this is the neighbourhood that became the very first Heritage Conservation District (HCD) in Winnipeg in April of 2019. Before receiving official designation, several houses in Armstrong’s Point had already been added to the City of Winnipeg’s historical resources list while more remained pending on the city’s inventory list. Still, that meant much of the neighbourhood could be severely altered should the wrong owner or developer come through, compromising the historic streetscape and depreciating the entire community. Even the Ryan House was at risk, and a hypothetical shortsighted owner would be legally allowed to alter, or worse yet demolish the valuable heritage home.

A single home does not a neighbourhood make; it is the collection of buildings, their design and distribution, interaction with the landscaping and community realm, that come together to create the streetscape. A quality streetscape contributes to a safe, lively, healthy and economically valuable neighbourhood. This, in turn, encourages people to take pride in their homes, enjoy spending time outside, interact with their neighbours, as well as attract tourisms and contributes more to the city’s tax base. Historic neighbourhoods are particularly adept at creating quality streetscapes due to their sense of place, interesting variations in architectural styles, inviting human scale and walkability.

Winnipeg’s HCD legislation recognizes the important role of historic neighbourhoods. As such, it strives to retain them while understanding that time cannot be frozen - neighbourhoods must adapt to remain functional. In designating Armstrong’s Point as an HCD, the City of Winnipeg has ensured the most crucial aspects of the neighbourhood will be kept intact. Even without its own heritage designation, the Ryan House now cannot be recklessly destroyed without any regard for the impact it will have on the greater community. With all of this said, infill and alterations are still possible – provided that the designs are sympathetic to the character of the neighbourhood.

Residents of Armstrong’s Point are clearly proud of their historic homes and have worked hard to ensure they are protected for generations to come. In just a few weeks, you will have a chance to explore one of these lovely historic homes at Heritage Winnipeg’s annual fall fundraiser.

This event takes place at the one and only 5 East Gate, on the evening of December 5th from 5:30-8pm. Inside this charming historic home, attendees will be able to sip fine wine, enjoy delicious food, and listen to the musical talents of Manitoba Underground Opera. There will also be an array of raffle prizes to be won.

Tickets are $100, and a charitable receipt will be provided.

All proceeds go to support the valuable work undertaken by Heritage Winnipeg. 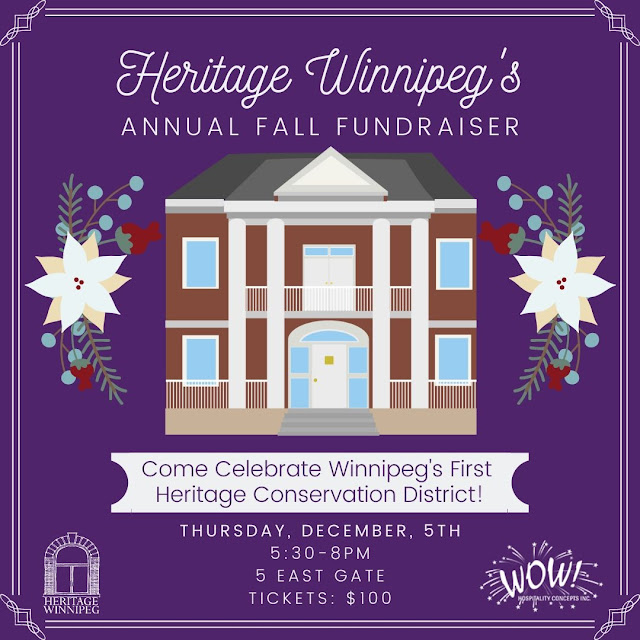 THANK YOU TO THE SPONSOR OF THIS BLOG POST: