December 18, 2017
On the corner of Langside Street and Sara Avenue an unassuming three story brick building has sat for over one hundred years. A long time grocery store, the building is located in the heart of the West Broadway, one of the city’s oldest neighbourhoods. The building has quietly watched the neighbourhood rise, fall and rise again, serving the community as both a grocery store and apartment. It changed owners many times over the years, but remained a cornerstone in the neighbourhood, looking much the same as it did when first built. In the fall of 2017, the once grocery store was reborn as a restaurant, breathing new life into an old space, where locals can once again gather, nourishing their bodies and souls.

Born in Ireland in 1814, James Mulligan came to Canada with the British military in 1848. Mulligan was promised some land upon completion of his military service, which seems to have ended with an early retirement after he lost an arm. A river lot on the north shores of the Assiniboine River in the Red River Settlement (Winnipeg) was given to Mulligan, bounded by Maryland Street, Furby Street and Portage Avenue. Mulligan then set about purchasing more property in the area, including some on the south side of the Assiniboine River. By 1878 Mulligan had become one of the largest property holders in the fledgling City of Winnipeg.
As the 1880s began, Winnipeg began to grow at a feverish rate, with rampant land speculation in anticipation of the arrival of the railway in 1882. As land values skyrocketed, Mulligan was eager to partake in the potential for wealth. With his land mostly unoccupied, in 1881 Mulligan began subdividing his property, selling residential lots. By 1882, the railway had arrived and Mulligan had sold most of his property, and so began the West Broadway neighbourhood in Winnipeg.

It was during this initial period of growth that a three story mixed use building was erected at the corner of Langside Street and Sara Avenue. Although the entrance is placed on the pleasingly angled front corner of the building, the official address is 164 Langside Street. Set amongst a residential area, the building fits in well with the similarly clade three story apartment buildings on the other side of Langside Street. There are few records of the building from this early period, with the 1913 reference to the Hill Brother’s Grocery at the corner being the first concrete proof of its existence. As it was a rather small and subdued building constructed during a period of opulence and grandeur, it would have been unlikely to garner much attention in the historical record.

The two main facades of the building, facing Langside Street and Sara Avenue, are a plain red brick with a small, brick dentil cornice detail running along the roofline. The entrance to the building is located on the angled front corner of the building, set back from main façade, creating somewhat of a portico effect. Display windows flank the entrance on the ground floor, featuring multi paned windows and a cornice detail that wraps around the front corner of the building. The second and third floor facades on Langside Street have matching sets of paired one over one windows, accented by a light stone sill. Single one over one windows in the same style continue the pattern on the angled section of façade above the front entrance. On the Sara Avenue façade the same style of window is used in a variety of sizes, spread inconsistently over the two upper floors. A small door on the far north end suggests a separate entrance to the upstairs apartment. The north and west facades of the building are a plain, unadorned buff brick with a smattering of windows on the second and third floors. The north west corner of the building is cut away, making room for a fire escape.
After nearly a decade at the corner of Langside Street and Sara Avenue, William Hill sold the grocery store in 1922. It remained a grocery store though, first as part of the Red and White chain and later as part of the Shop Easy chain. In 1942, under owners Jack and Alma Schiller, the store was christened the “Langside Grocery,” a name that held fast for several decades. Owners continued to come and go, sometimes living upstairs, sometimes changing the name.
With the end of World War II, a shift began to take place in West Broadway. The allure of newly built suburban neighbourhoods and the rise of a car-centric culture saw the leafy streets West Broadway being abandoned, with elegant homes being subdivided and low income tenants moving in. Crime and poverty were on the rise and prolonged disinvestment saw the neighbourhood fall into disrepair. The grocery store felt the effects of the decline, as the violence spilled over into its space, with holds ups becoming far to common of an occurrence. A particularly horrific altercation in April of 1996 was the final tipping point, with the grocery store being closed for good soon afterwards.

By the mid 1990s, community groups, dismayed by the sad state of the neighbourhood, began to take action. Reinvestment in housing slowly began to yield results, with housing values on the rise by 2001 and a growing fear of gentrification instead of decay. The grocery store soon became a part of the revitalization of the area, sold to architect Don Courtinage and artist Pat Courtinage in 1999. They converted the building into a main floor studio and a second floor office space.

In 2013 the building was sold again, this time to siblings Jason, Ryan and Shelley Armstrong. The three purchased the building with the intention of converting it into a pizza restaurant that would serve the local community. But those plans were put on hold in when it was instead rented out to in the Canadian comedy series Sunnyside. The grocery store was converted into a fictional café known as Dark Roast, used regularly as a set until 2015. After the departure of Sunnyside, the siblings once again began work on their pizza restaurant. 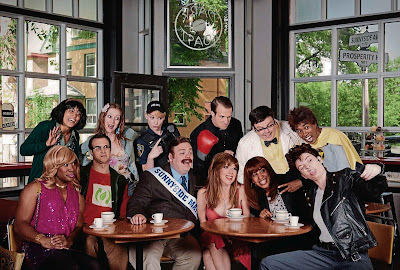 Initially the restaurant was to be named Corticelli, serving appetizers, personal pizzas and drinks. As plans were developed for the space, it was recognized that large pizza ovens would overrun the small footprint of the ground floor, leaving little space for diners. Instead the owners opted to serve locally sourced, French inspired small plates, accompanied by a wine and cocktail bar.
The grocery store officially opened as a restaurant in the fall of 2017. Although the official name is Corticelli, the local community tends to still call it by its former name, the Langside Grocery. A dark wood bar dominates the room as the salvaged tin ceiling draws your eye upwards. Doing their best to not change the original space, the new restaurant accommodates about 30 people and features a patio in the back yard with room for 28. It is intended to serve the local residents, a cozy space to gather and commune, harkening back to an era before cell phone overtook peoples’ lives. Often packed with people, the growing success of the Langside Grocery is a tribute to the owners who let the character of the heritage building speak for itself and for focusing on the people who matter the most, the local community.

Blog by Cheryl Mann, on behalf of Heritage Winnipeg

The St. Regis Hotel – Paradise Lost to a Parkade